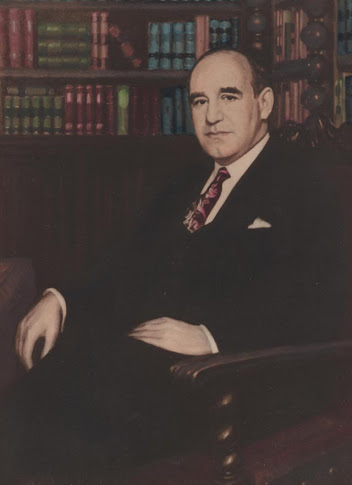 Speaker of the House, 1940 (portrait by Valderrama) 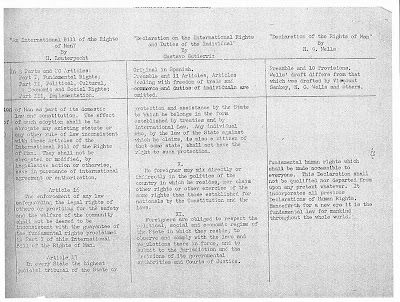 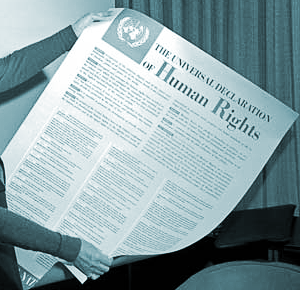 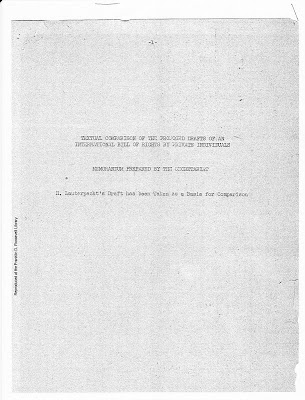 John P. Humphrey prepared the first draft for the Universal Declaration of Human Rights in 1947. He states in the Human Rights Quarterly, “Memoirs of John P. Humphrey, the First Director of the United Nations Division of Human Rights,” published by The John Hopkins University Press, Vol. 5, No. 4 (November,1983), pp. 387-439, “I was no Thomas Jefferson and, although a lawyer, I had had practically no experience drafting documents. But since the Secretariat had collected a score of drafts, I had some models on which to work. One of them had been prepared by Gustavo Gutierrez (Sanchez) and had probably inspired the draft Declaration of the International Duties and Rights of the Individual which Cuba had sponsored at the San Francisco Conference." (pp. 406). This, in fact, was correct. Dr. Gutierrez wrote a book entitled "La Carta Magna de la Comunidad de las Naciones in 1945, where the document mentioned above originated. In addition, his draft for the creation of the Universal Declaration of Human Rights was chosen as one of seven drafts presented by "private parties."

Below you will find the first three out of seven proposed drafts. The first draft by Hersch Lauterpacht was used as a basis by which the other texts were compared. The draft by Dr. Gustavo Gutierrez (referred to above) is to the right of Lauterpacht's followed by a draft proposed by H.G. Wells. The document below was obtained from the Franklin D. Roosevelt Library in Hyde Park, New York. Click on the document in order to view it larger. 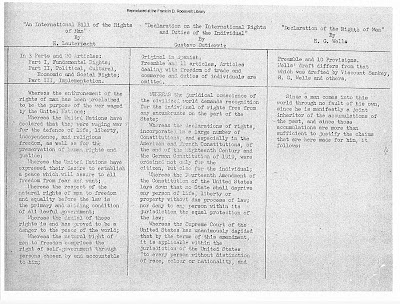 In 2008 Indiana University Press published "Human Rights at the UN, The Political History of Universal Justice," written by Roger Normand and Sarah Zaidi. Under the heading Chapultapec: Rebellion or Reaction? the authors write, "The dissatisfaction of Latin American governments found expression in an extraordinary meeting in February 1945 at Chapultapec Castle in Mexico City, where twenty Latin American countries and a large delegation from the United States participated in the Inter-American Conference on Problems of War and Peace. They reviewed the Dunbarton Oaks proposals in details and introduced 150 draft resolutions urging substantial reforms, many addressing human rights. (49)"..."Cuba submitted two detailed proposals for consideration, a "Draft Declaration of the International Rights and Duties of the Individual" and a "Draft Declaration on the Rights and Duties of Nations. (50)" These two drafts were written and published by Dr. Gustavo Gutierrez in a book entitled La Carta Magna de la Comunidad de Naciones. Please see blog entry for December, 2008 entitled "The Magna Carta of the Community of Nations, 1945."

Normand and Zaidi continue. "These proposals were reintroduced in San Francisco and during the drafting of the Universal Declaration of Human Rights. Latin America's significant intellectual production supporting human rights is a major reason the region has been called "the forgotten crucible" of universal human rights. (51) Latin American jurisprudence was particularly well suited to bridging cultural divides in human rights by linking civil and political rights with economic and social rights...(52) With their dominant voting bloc, the Latin American countries would play a significant role in advancing human rights throughout the UN process."

"...These civil society proposals for human rights found strong support among non-European states, especially in Latin America. (96) Many of these states had recently written human rights into their own constitutions, and their delegations included prominent jurists whose primary focus was to advance human rights. Peace and security, they argued, could be based only on the protection of human rights, not just traditional civil and political rights but also economic and social rights. Chile, Cuba and Panama resubmitted the proposal for binding international bill of rights from the Chapultapec Conference."

Referring to the statements made in the above paragraph, it is interesting to note here that Gustavo Gutierrez had provided the first draft for the creation of the Cuban Constitution of 1940 and was considered among Latin America's most renowned jurists. For more information regarding this topic please see blog entries;
1) "New Constitutión Project", 1940. Blog entry April, 2009
2) "Proyecto Nueva Constitución, 1940", # 1, #2 and #3. Blog entry September, 2009
3) "Pioneer of 1940 Constitution" by Enrique Llaca. Blog entry June, 2008

"...The main challenge to the Big Three's (U.S.A., the U.K. and the U.S.S.R.) human rights strategy came from the insistence of Latin American countries, supported by civil society groups, on proposing a binding international bill of rights. With support from Cuba, Chile and Mexico, Panamanian foreign minister Ricardo Alfaro put forward the American Law Institute's draft bill of rights."

"...The idea of an international bill of human rights received particular attention. The UN Secretariat staff noted that as of 1946, it had received twelve different drafts submitted by the delegations of Panama, Chile, Cuba, and the American Federation of Labor as well as private drafts from Hersch Lauterpacht of Cambridge University, Alejandro Alvarez of the American Institute of International Peace, Prof. Frank McNitt of the faculty of Southwestern University, and H. G. Wells. (6)"

Gustavo Gutierrez' draft was among this group of seven "private" drafts mentioned above and at the top of this entry, including those by Wilfred Parsons and Irving A. Isaacs. Dr. Gutierrez' "private" draft was the one proposed by the Cuban delegation in San Francisco just like the draft introduced by Chile's delegation could have been that of Chilean, Alejandro Alvarez.
Posted by "un nieto" at 8:54 PM No comments: